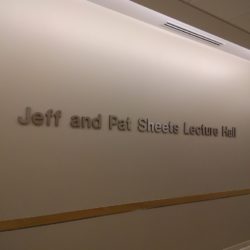 Jeffrey W. Sheets (π, 122) was recently appointed to the Missouri S&T Board of Trustees. Brother Sheets served as Treasurer in 1978 and President in 1979 of Epsilon Nu. In 1980, he earned his bachelor of science in Chemical Engineering after which he began his career with ConocoPhillips in the North American division of Exploration Read more about Brother Sheets Becomes Trustee[…]